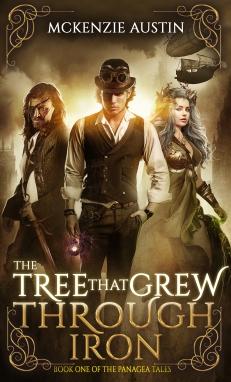 The Tree That Grew Through Iron: Book One in the Panagea Tales

The world’s end was his beginning.

Whole chunks of earth are withering away from the mainland, and falling into the sea.
Natural disasters are claiming thousands of lives.
Prayers are no longer answered by gods.
Prayers are answered by machines, and the Time Fathers of Panagea.

While running from the wrath of Panagea’s other Time Fathers, Nicholai lands in peculiar company. Can a fabled immortal, a crew of societal rejects, and a silver-haired woman with a mysterious past, breathe life back into a world on the brink of death?

With all of existence at stake, Nicholai and the others prepare to fight until their last breath to change the fate of Panagea. Who would ever guess that success might be just as fatal as failure?

The Gods Who Harvested Men: Book Two in the Panagea Tales
They halted Panagea’s decay. Some gave everything for the good of the land … and for the good of the people.
As it turns out, the grass isn’t always greener on the other side of the iron fence.

The efforts of Nicholai, Umbriel, Kazuaki, and the crew welcome the purifying breath of nature back into a depleted, metal world.

It isn’t all they invited back.

The archaic gods and goddesses of Panagea’s past, forgotten long ago when mankind realized they could answer their own prayers with machines, return in a flurry of bloodshed. While humanity was quick to forget them, the gods never forgot the betrayal they suffered from their creators. With new changes allowing them to crawl back into the forefront of mankind’s thoughts, they intend to issue a painful reminder.
As Nicholai and the others scramble to contain the gods’ wrath, they learn the only advice they have is absent of any comfort.
Hold fast.
Keep your wits about you.
And most important of all … no matter what else you do … don’t pray.

The Serpent That Swallowed Its Tail: Book Three in the Panagea Tales

Nicholai and the crew find that after the devastating events in Seacaster last year, their lives have fragmented from one another entirely.

Not unlike the crew, Panagea has become a land divided. The continent severs into two landscapes: the territory of the lesser-gods, and the land of the people who managed to survive their onslaught. Invisible lines run between both borders and brains, as disparities collide all around. Soon, all must ask themselves, “Who is the bigger monster? Gods, or men?”

Plagued by resistance, betrayal, greed, and doubt, will Nicholai and the crew survive to taste victory over their burdens? Or is everyone just running on borrowed time?

When the serpent swallows its tail, eventually, everything comes full circle.

“A powerfully written, magical story awash with memorable characters. Highly recommended!” – ★★★★★ – The Wishing Shelf
“A remarkably inventive and magical novel. McKenzie Austin strikes a beautiful balance between life and death, truth and lies, and love and loss within these pages, and while the action is riveting, the philosophical musing is similarly powerful. There are countless subtle moments of meaningful dialogue and pearls of wisdom buried in the narration. With this brilliant foundation to build upon, the next installment is a very exciting prospect for fans of genre-bending fiction.” – ★★★★½ – Self-Publishing Review

Question: What age is appropriate for this book?

Answer: I find the answer to this question is often a difficult one to nail down. Instead of giving a specific age range, I’ll say what can be encountered upon reading it:

Book one (The Tree That Grew Through Iron) does have some violent battle scenes, including, but not limited to, description evisceration, stab wounds, bullet wounds, and severing of the skull from the spinal cord.

There is some cursing (your occasional “shit” and “damn”. The ‘f’ word has been replaced with a similar counterpart. When characters feel compelled to use that word, they say ‘feck’ instead.

Sexual content includes kissing and a scene where a character is naked (but not having sex). Merely sun-bathing.

There are some heavier philosophical musings that a younger audience may not grasp, but that’s individual to the reader.

While book one is as it is, book two in the series (The Gods Who Harvested Men) does get a little more explicit.

The battle scenes are as equally descriptive as book one.
The cursing is the same level as book one.
There is more kissing and implied sex scenes in book two (nothing more descriptive than groping… more of a “fade to black” kind of deal.)
There is also the introduction of a male character’s relationship with another male. Nothing explicit that you wouldn’t also find in the male/female couple relationships touched on in the series, but given some peoples’ touchiness on the subject, it seemed worth mentioning.

If you have any other questions you’d like to ask or have me add to the FAQ, please don’t hesitate to ask. Thank you!